Ironman Coeur D’Alene was my third Ironman in as many years. Crossing the finish line of my first, Ironman Mont Tremblant in 2012, is a moment I will never forget.  A switch to coach Russell Van Every in the year leading up to Ironman Florida in 2013 resulted in a completely different approach to Ironman training and I went into that race feeling strong and confident. An amazing day, coupled with a very defined plan resulted in a two hour Ironman PB!

Training for Coeur D’Alene was a tough one, given the horrible weather we endured this past winter. Still I felt ready to see what I could do after having had some good results during tests done as part of my training.

Travelling to and from Coeur D’Alene is not for anyone who gets travel weary or irritated easily. Each way was a long day of flight connections, cancellations, delays, rental cars, and an almost hour drive from the closest airport in Spokane, WA. Travelling with Matt and Blaire helped and we made the best of it. I even got to see the strip in Las Vegas for the first time during a 3 plus hour layover!

Coeur D’Alene itself is a beautiful area with gorgeous views of mountains and the Ironman race site on Lake Coeur D’Alene is idyllic. Unfortunately the two days leading up to the race were cold and rainy but race day was projected to be cool and dry which is perfect for Ironman racing.

Nerves coupled with a marathon of MTV’s Ridiculousness made for a tough time falling asleep and the 4am alarm came way too early (as 4am alarms usually do). Toasted English muffin with PB and banana was forcefully eaten and before I knew it the shuttle taking us to the race site was there.

Body marking, tire pumping, and special needs bags drop off was uneventful and then commenced the dreaded waiting. I hate this part the most. Finally it was time to get the wetsuit on and make our way to the beach.

The super windy conditions made for very choppy waters in the lake. Seeing this, I seeded myself in the back section of the 1:16 – 1:30 swim start group expecting a bit of a slower swim.  After more waiting, and the usual tears as the magnitude of what I’m about to do hits me one final time, the first AGs entered the water and we started the slow procession to the start mat to kick off the day. Unfortunately not everyone took the conditions into consideration when seeding themselves (or people are delusional) as within 100 meters I swam into a wall of people swimming slower than me (and that’s a feat) and panicking from the cold/chop. It was trying to get around this group where my timing chip was pulled off by someone in full on, arm flailing, panic mode. This swim overall was tough for me. Super choppy water and traffic everywhere on both loops meant I never got into much of a rhythm. The cold water started to really affect me too and by the half-way point of the second loop my body was doing that weird, uncontrolled spasm that happens when you get really cold.
Finally out of the water in 1:42 by my Garmin, which also showed I’d swam 4,500 meters (I’m notorious for this – you’d think I liked swimming or something), I told a volunteer that my timing chip was gone. After a bit of confusion (almost 12 minutes worth) I was given a new chip and sent on my way for the bike leg.

The Coeur D’Alene bike course is challenging in it’s own right - two out and back loops with the majority of climbing on the out portion of each loop. Couple that with tremendous headwind (45km/hr at some points) on the out sections and it was like climbing uphill into a wall. Other than that, it’s a beautiful course with really nicely paved roads, and on any other day I might have actually enjoyed it as much as I did IMMT. Unfortunately, the bike did not go well for me and by the time I hit special needs I was talking myself in and out of quitting. The only thing that kept me going was that I couldn’t come up with a reason that I felt was good enough to tell my coach. What was I supposed to say? I was tired? It was hard? I got a flat? It’s Ironman and you’re supposed to be (somewhat tired) and it’s supposed to be hard and flat tires happen to a lot of people. Looking back I was unrefuelled as it was a very cool day and I’m not the most disciplined at keeping up with my nutrition when it’s like that. I’m like a cranky five year old when I don’t have enough food in me so I blame part of my unfocused and dramatic mental state on that.

Throw in a flat tire and it was like the sky was falling. Anyhow, a very long amount of time after I started the bike I finally rolled into T2 and gladly handed my bike off to a nice volunteer who could have pitched it in the lake for all I cared at that point. 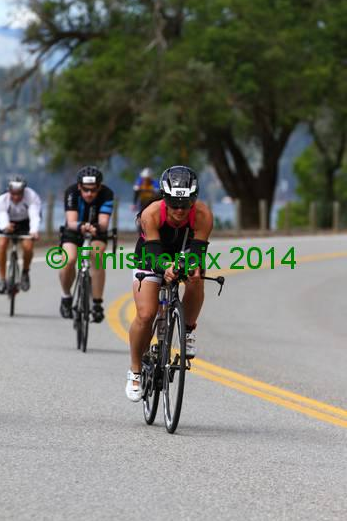 I grabbed my bag and entered the change tent feeling pretty disappointed about how the day had gone so far. A quick change into my socks and shoes and I was ready to get moving. On my way out a volunteer was piling gummy bears into little snack bags and I grabbed one on the way out. Not sure why since I’m not even a huge fan of them. These were the best gummy bears ever made and were just the boost I needed. Mental note – gummy bears in T2 bag for future races.

Nursing my bag of magic gummy bears I headed out onto the run course and honestly started to run angry. I knew what pace/hr I was targeting and although my pace was right there my heart rate was reading higher than it should be. I debated slowing down to get into my target heart rate but the effort didn’t feel above aerobic pace so I decided to throw caution to the wind and keep at that pace for as long as I could. I felt like the worst that could happen was that I would blow up on the run and just add to the gong show of a day.

The run course at Coeur D’Alene is a double loop with a hill at the halfway of each loop that you get to go up, come down, turn right around and go up and down again. It runs along the lake in parts and is all paved. Of the three Ironman races I have done the crowd support on the run course of this race is by far the best. There is almost no part of it that doesn’t have people lining it to some degree. I was trucking along and feeling really good passing tons of people that were walking. I think that bike course really chewed up a lot of legs and racers were paying for it on the run. Having had the issues I did on the bike I ended up biking at under my target watts so at least my legs were “fresh” for the run. I made a point to take a little something, anything that looked good at every aid station so that I stayed fueled. The first loop flew by and heading back towards downtown and the turnaround I spotted a guy up ahead with a 44 on his calf. I’m not sure why this guy stood out to me but as I passed him he told me that he had been going back and forth with me all day and that I looked really strong and his goal was to keep me in his sights for the run. I thanked him and wished him luck and saw him not far behind me at the turnaround downtown and again coming back after the last turn around at the hill. This is where things started to really get hard.  The last 10k of the Ironman run is where I really need to dig deep to keep things together both physically and mentally. I was keeping my goal pace and finally reached the spot where you go one way for the second loop and the other to head towards the finish. 1k to go! Right here was the tiniest incline that caused an injury that I’d had a few weeks earlier really rear it’s head. It had started to creep up but something pulled and the pain stopped me in my tracks. I started to walk and try to stretch it out when that same guy pulled up beside me, put a hand on my back and said, “Oh no, I never thought I would see you walk one step. You are running this in and crossing the finish line in front of me where you belong.” I thanked him and we ran side by side. Coming around a corner the entire downtown is closed off and the streets were packed with people screaming like we were the winners. I’m not sure what my pace was but I felt like I was sprinting a 5k. About 100m from the finish that guy touched my shoulder, high fived me congratulations, and dropped his pace a bit so I could have the chute to myself. I crossed the finish line with a run time of 4:15. A 15 minute run PB from Ironman Florida and exactly what Russ had predicted I’d run. A very nice volunteer caught me, put a Mylar blanket around me and asked me if I needed medical. I told her that I just needed to stop moving and could I please sit. I sat on the ground for a few minutes and she stayed with me to make sure I was ok.

In the end a 14:05 wasn’t the race I wanted to have and that’s a tough pill to swallow when you put so much time, money, effort, and focus on one day. I’m glad I didn’t quit though. As disappointed as I am about my swim and bike times I’m super proud of the run I put together and as a sign on the run course said, “Pain is temporary. Results on the Internet are forever.”